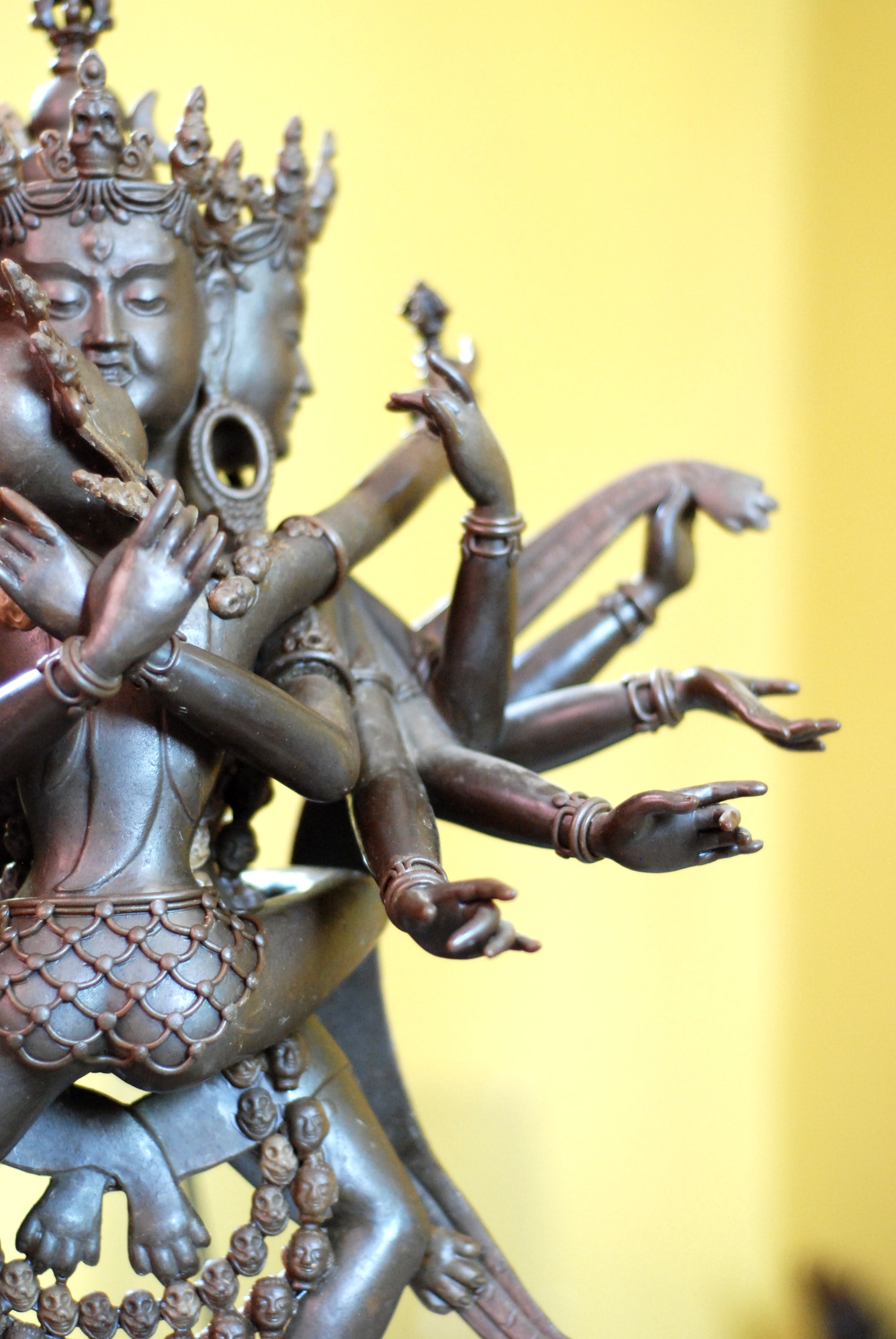 tantra. sounds a bit dirty, right? smells like incense. feels hot & sweaty. is it what you think it is?

„you’re about to embark on a wonderful journey! would you like to feel more intense excitement than ever before? experience more love for yourself & others than you ever imagined possible? have the best sex ever—truly, because it’s not just sex; it’s much more?“
(judy kuriansky - the idiot´s guide to tantric sex)

this would be a bit closer to reality:

india, some 1000 years ago:
a highly formalized sexual ritual, preferably with prostitutes (because those are so „unclean“), in order to collect sexual fluids. drinking of a mix semen of & menstrual blood as the ultimate sacrifice that brings the greatest spiritual & material rewards. probably accompanied by the beheading of some animal.

„for european colonizers, orientalist scholars, & christian missionaries of the victorian era, tantra was generally seen as the worst, most degenerate & depraved example of all the worst tendencies in the “indian mind,” a pathological mixture of religion & sensuality that had led to the decline of modern hinduism. yet for most contemporary new age & popular writers, conversely, tantra is now celebrated as a much-needed affirmation of physical pleasure & sexuality, as a “yoga of sex” or “cult of ecstasy” that might counteract the hypocritical prudery of the christian west.“
(hugh urban – the power of tantra)

what is tantra, then?

truth is, its really hard to say. just like hinduism, the term tantrism is a western invention of the 19th century. there is no such term in any asian language. we are speaking of a diverse family of cult & religion that is spread all over asia, ranging from the class of texts that gave tantrism its name: the tantras, which were often written in sanskrit, to tribal practices that more resemble a very archaic layer of "shamanism" than any kind of yogic contemplation.to name a few.

the answer to that question depends on where you are, in what century & who you ask. many, especially the early texts are lost or have never been translated.

what we know for sure though, is that it has never been a fluffy little subculture of sexually slightly deviant people that are seeking personal happiness & community.

so, let´s debunk some myths:

2. tantra was not fluffy

we´re talking about powerful, dangerous stuff here, not only because pretty much all of the vedic taboos were to be broken. therefore it was mostly secret & only for the initiated. through magical practices including sexual fluids & blood, & spiritual techniques such as mantra, meditation, yoga & visualisation the adepts were seeking to become one with the devine female principle, thereby gaining power & wisdom. embodying gods is no picknick.

3. tantra was not in any way feminist

some believe that tantra was one of the fewcultsthat empowered women. it is true that shakti, the feminine principle,is a central aspect & that women played a major role in the rites, but both in the abstract & in the concrete form shakti was being used for the spiritual transformation of the men. in fact, women were mostly excluded from ritual practice. the worship of a powerful goddess does not automatically imply that women have rights.
(at least, this is true for the later cults - we don´t know much about the network of roots tantrahas grown out of, which might have had a different attitude)

4. tantra was not about personal happiness

liberation in tantra was not considered a liberation from societal restrictions; or the freedom to live in an „authentic“ way; or to have a peaceful mind. in tantra, liberation means to become free from one´s own self. it is a mystic path that acknowledges sensual experience & desire as positive aspects of life instead of suppressing them with force. nevertheless, the goal is to become free of them in the end. some call that „enlightenment“.

tantrism became known in europe during the victorian era, when it was combined with other practices of sex magic, for example by aleister crowley (aka "great beast 666") & austin osman spare. indeed, european techniques of sex magic were later to a large degree confused with tantric ones. the big change started when this mix was being romanticized during the sexual revolution of the 60s/70s as a means to (not only) sexual liberation. from then on, it has been freed from its ritualistic & traditional „burden“ & turned into commercialized forms of erotic practice, eclectic spirituality, "healing" techniques as well as a branch of sex-positive subculture. we might call that neo-tantra.

(meanwhile, in india: modern indian movies often portrait a tantric, who is usually the bad guy using black magic for manipulation, handling lots of skulls. in modern indian mainstream, tantrics are primarily perceived as dangerous magicians. another fun fact: most of the surviving schools of tantra today recommend celibacy.)

interesting story!
now, why should we care?

the neo-tantra-culture today has much to offer. it appeals to the "postmodern" western individual for many reasons: easy steps, immediate effect, focus on body & pleasure, spirituality without having to retreat from society, no need to believe in any dogma, individual practice. it also adresses many needs that often go unfulfilled in our culture: connection/love, relaxation/health, spirituality/meaning, self-knowledge/dignity, sexual sadisfaction, the healing of wounds.

1. maybe it would be worthwhile to take a look back. one important thing the neotantric self-exploration culture could learn from the "original" tantra, is the concept of adhikara, which means something like "competence". as has been pointed out in classic texts, tantric techniques are powerful and getting a kick out of them was never the point. using them without proper preparation can even make people worse (much worse, in some cases).

2. sexual magic in the west has always been connected to a quest for a general social, political, economic equality & liberation. this is true for neo-tantra as well. but we have to acknowlege the fact that sexual transgression in itself will achieve nothing. plus, true sexual liberation is not going to be possible without liberation first taking care of the larger societal issues.

3. tantra has always been changing its shape, thus making sense in its social context. it has always been a pursuit of „the good life“, as the philosophers say – whatever that meant in its specific context. what does it mean for us, today? what is the need around the intersectionality of sexuality & sacredness, today? what taboos do we want to break? what are we missing out on? can we weave our western hedonistic lifestyle & some solid asian spirituality together? how could that make our world better?

"are they merely reflections of an increasingly pluralistic,rapidly changing,hedonistic,and “chaotic” consumer society? or do they also offer the hope for breaking free of that culture? does the quest for radical liberation [...] really lead to any meaningful sort of freedom? or has it simply transformed the ideas of “liberation” and “transgression” themselves into commodities that can be purchased for $19.95 from  amazon.com?"
(hugh urban)

this text has been proofread by a true, original, authentic tantric practitioner & scholar of Indian spirituality (thanks, Ben!). nevertheless it is of course a gross oversimplification.

hugh urban – the power of tantra. religion, sexuality, and the politics of south asian studies

felurian likes to swim in a fertile pool of concepts, metaphors, symbols & pictures. occasionally, she shares the offspring with us.